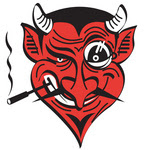 Meet a cartoon character. Mr Stink Anonymous Mr Rough Riders. To get a first-hand feel of this hero read through the comments he's been loyally posting to me of late.

WOAH!! Another POOP LOOK ALIKE dish!! MAN, you are so good in shitty presentation BITCH! After so long you're back to track BIACH!!!! I thought u were dead???? Fuck you bitch!!!!!!!!!!!!!! (this comment has unfortunately deleted during recent maintenance period by Blogger)

So you're a psycho first and then a coward and then well well....

My only regret about you is that you're from my beautiful state of Kerala in India. I'm a proud malayalee proud of my roots but I strongly deplore the male chauvinism in the community here which is its biggest curse. One of my friends (an educated wise person) recently said women are better off everywhere else in the country compared to Kerala. I could only sigh inwardly becuse it's so true. And it's precisely men like you who should be wiped out completely to make the plight of women in my state better.

I notice you've been doing your stealth rounds under a cowardish "Anonymous" in quite a number of blogs. We're all confident women capable of carrying ourselves well. And by God's grace married to good (malayalee or otherwise) men who are extremely supportive. Because only a happy mind can produce creative spaces like this.

I realise there's no point in communicating sensibly to such degraded cartoons like you but pl take notice that your comments do not ruffle one single feather in me. I, like my peers, am a confident skilled and sophisticated woman privileged to be part of a Community that is the cream of the country. So you can continue your abusive remarks like a rabid dog till whenever...I'm too suave for a puny worm like you. I only pity the family that houses a pervert like you :(

Are you with me gurlzzzzzzzzzz???

Oh yes and absolutely with you sister!! What a jerk of a guy to post comments like that and hide under the name "Anonymous". We may have a few suitable names to give him in case his pervert mind cant think STRAIGHT eg: A#s$h**e!!!!! In case he is reading this comment - this one is for you - BUZZ OFF!!! Poor girl whoever it is that might get married to this stinker fella, oh and in case you are already married then im truly sorry for her but then again she might not realize what a psycho she has spoilt her life with !!!!! Anyway, i cant challenge my intelligence thinking or talking about "clowns" like him so let me give him a BOOT OFF!!!!

Yea.. Mr.SA... You nameless coward, piece of junk, mean loser,get a life! Dont mess around in a creative space like this..

Thoma, guess he eats shitty food and threw up shitty words.. we are with you gurl.. you keep cooking and keep posting your yum yum food recipes.

AGREE 100% Thoma! We are with you and love your blog and cooking- Keep inspiring!!!

I wouldn't worry too much about someone like that, he evidently has a lot of issues and shouldn't be taken seriously....feel sorry for him, he is a miserable human being stuck in a miserable life...he is just upset that anyone can be happy!
keep blogging and use the delete button for him from now on!

It takes courage and sensitivity to create and neither to be destructive. I am proud that you are one more added to the cause of creating. It makes those that choose to insult and attack more and more insignificant by the day. Keep on cooking and looking at the world of colors and flavors through the joyful eyes you have!

I am with you girl! People like him leaving dirty comments is the reason the delete button was invented. Don't listen to him at all because you are wonderful and talented and it's always a pleasure visiting your blog :)

These kind of people are a poor excuse for a human being , don't even bother with them , nalla kurachu theri ariyunundenkil parayamayirunnu .

Thoma-this is why I don't allow anonymous comments on my blog. You never know what kind of comments they can leave...but this particular character probably has a crush on you, and wants to drag you down because you are attractive, smart, and confident, and he does not know how to fit into society with ease...this is his way of trying to be this "macho" character by trying to be tough, and rough by wanting to intimidate you, which of course is not working.

You certainly showed him "who's the boss"...lol
You have to report this kind of comment to Blogger...which I do believe they have already picked up on. This kind of "trash" cannot be tolerated, and will not be tolerated!
You're stronger than you think when something like this happens~
On a lighter note...thanks for asking, Lora is recovering very nicely, and I'm finall walking almost quite normally.
You're such a sweetheart...stay positive!!!
xoxo

Oh my!!! Such comments are seriously degrading. I am fuming over here. Foul tongue, foul character. But how do you know he is a malayalee? :( He is simply venting his negativity wherever he can. But thats such a lot of negativity!

Well, all I can say is that he hasn't dropped balls yet and that's why he is still Anonymous!
Stay away from women loser! And what's the point even getting closer to them with no balls anyway?

This brings a wry smile on my lips. Go for it Girl.

One thing is clear he has a crush on you.

One word for you gal ~ Ignore! that's the best medicine for these types of freaks! With you all the way on this :)
US Masala

You're so fuckin' lame biach. You think by doing this you are so perfect? You're THE SAME as me as well! LOL! I'm really LMAO! You're the SUPER JOKER BIACH! Serves you right. Pity you. I'm feeling sorry for you bitch. You go BITCH!

That's weird though. If you had any enemies you'd probably know about it.

Mr Stink Anonymous: i knew you would spill your spittle here considering the shameless blotch of existence you're. people like you cannot be redeemed so easily. and jerk, you don claim one lapel to pity me...see how many more pity you!!!!

candice: yes he does have issues with his English. he's put LOL in his latest comment to me...hahaha

I wonder if there's some way to track IP on Blogger. That would at least give you a heads up as to the general geographic area he's posting from.

Whatever you do, do NOT let this guy ruin things for you. Keep blogging. I'm glad you posted your question and I stumbled upon it and thus, here. I am a cooking nut too and always on the lookout for new recipes.

And when you find out who he is, I'll happily join the list of bloggers that help you make his internet life...unpleasant. :)

Girl, I'd suggest you completely ignore this person and trash such offensive notes. Such people don't deserve second thoughts let alone a second chance to publish their comments. Cheers my friend!

im sooo with you on this...And ask him to go 2 hell..he seriously has issues as we can already figure out.
And take this from someone who's been in this situation before...dont encourage anonymous comments...if they are man enough to come out with their name, let them, otherwise he has no significance..
Kudos to you girl..u did a great job letting this out in the open.

I just realised that you hadnt entered ur email in the comment form and hence when i replied to ur question in my blog, it wouldnt be sent to u. Hence posting the reply here :) - Thanks Thoma :) Nice to have you here. I have installed the intense debate commenting system along with their plugin "CommentLuv" Intense Debate allows replies to individual comments and CommentLuv adds a link to the most recent post of the commentor. Isn't that cool? Here's a link which explains how to install intense debate commenting system on blogger - http://www.bloggerbuster.com/2008/05/how-to-install-intense-debate-comments.html

Heavens! How can someone be so horrible and do it in public like that? Is there a way you can block or automatically delete? Good for you for not letting it get to you, Thoma. We LOVE your blog and don't let that upset you. Just remember you are fantastic, we adore your blog and keep that lovely sense of humour!

Of course I could've deleted all his comments...but didn want to let go of a chance to create some halchal :P

Thank you all for your forceful comments!

Thoma,it's so unfortunate that you had do experience such mean spirited and vulgar comments. I do hope that sharing it with us, your blogger friends, brings you the support to move beyond this horrible experience. If I may suggest;let's not empower this miserable individual by giving him the much needed attention he is so desperately seeking. He's simply not important!
Toma, keep on blogging and treating us with your wonderful recipes.

anna: thnx much. yea, really he cannot be important!