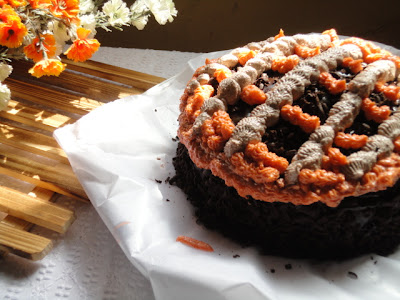 Am late. Thomas birthday was last month and all of it happened last month (lil over a month back) but I loved being late here. That's me.

Changing seasons, changing tastes. As much as I've developed a snicker for dark chocolate I find myself baking more of it! My heaven is made of not dark chocolate but white...hmmm yumm. However, my pantry has a generous stock of dark chocolate slabs which I "avariciously" (mind you, not greedily..) bought in the previous metro we were in. And in my new town (oh so lovely Goa; my town Vasco is so so sleepy yet I love it!) the climate is so scarily hot and humid that I found many of my masalas topped with fungus and I hate wastage.
I hate wastage of any kind; be it food, words, love, energy, time.
And I started on frantic efforts of storing my box of choc slabs in the coolest corner in my almirah along with my clothes...I realised I should do something! So it's mainly chocolate baking and desserts. Thankfully I've droves of people around to nosh on it.
I didn't taste this cake as it was baked for Thomas' colleagues. There had to be a cake-cutting ceremony right! Those who tasted it said "awesome". Now that's like at least a "very good" because the men around here are gallantinos and I always take their compliments one tier down :P It's rich and decadent, of course, and I slathered it with chocolate sauce and choc chips with a vengeance...mercilessly...I dunno, was smitten by some choc bug that one hour!

(Self-rising flour is by adding 1 1/2 tsp baking powder and 1/2 tsp salt to one cup all-purpose flour or maida.)

Sift flour, cocoa and baking powder into a large bowl. Beat butter and sugar with an electric mixer at medium speed until creamy. Add the egg yolks one at a time, until just blended after each addition. With mixer at low speed, gradually beat in the dry ingredients. With mixer at medium speed, beat the egg whites and salt until stiff peaks form. Fold them into the batter. Spoon the batter into an 8-inch pan that's been buttered and floured. Springform pan is ideal. Bake for 40-45 mins, or until a toothpick inserted comes out clean. Cool the cake a bit; loosen and invert. Let cool completely. Dust with some cocoa powder.
Frosting: Melt the chocolate, butter and condensed milk in a double boiler over barely simmering water. Slather the cake generously all over. Loosen it with some milk if too viscous. Spoon some into a pastry bag and pipe on top of the cake in a decorative manner. Decorate the sides with grated chocolate. (I made additional butter frosting as I wanted the two different colours in the pic; I added red colour to one portion and cocoa powder to the rest.) 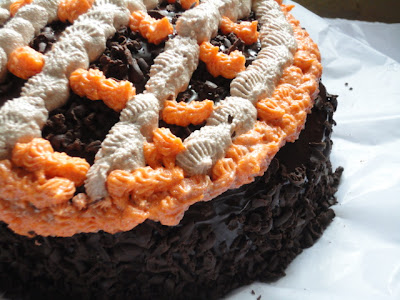 Over to the second episode of the soap! I planned a surprise on Thomas' birthday eve. I requested the bachelor boys (a VIBRANT lot of seven to eight guys) right opposite for a "designed bounce": which means whether I'd invited them or not they would've bounced; so I thought it's better to plan it! They came in at the right time with a fabulous birthday cake (pic) and Chaitanya (Chatty) had forgotten the candles I'd asked him to buy. He's passionately courting his fiancee and my request ended up like a candle in the wind in his mind ;P. You're excused Chatty. Wait till you get married and start getting "half kilo baingan, one kg onion, hundred gm garlic" smses instead of the "sweets and darls and honeys" message croon that's happening now!! That said nothing negative intended on conjugal bliss. Companionship is its best gift: the potatoes and onions are just part of the onus of responsibility that comes with a family life...You've to graduate one day or the other right? ;P

K...I digressed. The boys came in; I'd preset the birthday song (in case the boys suddenly lost their voices enmasse..muahaha); there was one shoddy candle I'd yanked out of my pantry (Chatty...chup) that thankfully glowed like someone lighted to lighten; and the table was laid with some yummy meat/veg rolls and sandwiches. Thomas was woken up and I think he went through the entire process sleeping with his eyes open...!!! because he's one man capable of stabbing you if woken up from sleep. Wow we survived, boys!! The cake was cut; the boys sang the song a second time whoa; and whacked the goodies happily gratefully.

All lived happily ever after...

Thank you Thomas for waking up and leaving me alive; thank you boys for your sweetness and promptness :)
Posted by the Junkie book at 12:40 PM 39 comments